We have a new collaborative paper with the Biophysics and Biophotonics groups at LENS in PNAS on GAP-43-depedent regulation of presynpatic sprouting.

Plasticity in the central nervous system in response to injury is a complex process involving axonal remodeling regulated by specific molecular pathways.  In a this collaborative study with the Biphysics and Biophotonics groups at the European Laboratory for Non-Linear Spectroscopy (LENS) in Firenze, Italy, we dissected the role of growth-associated protein 43 (GAP-43; also known as neuromodulin and B-50) in axonal structural plasticity by using, as a model, climbing fibers (in which single axonal branches were dissected by laser axotomy, avoiding collateral damage to the adjacent dendrite and the formation of a persistent glial scar), and found that:

This study shows a requirement for GAP43 in regulating synaptic stability.

Figure 1 – In vivo imaging of climbing fibres (CFs). (A) Two Left panels show the two-photon fluorescence (TPF) transversal (maximum intensity z-projection of 60 images acquired from 0 to 120 μm deep below the pial surface) and sagittal view (digital rotation of the stack) of a single CF labeled by green fluorescent protein (GFP) expression in the cerebellar molecular layer. Right panel shows a confocal image of a single CF in a sagittal slice obtained from fixed cerebellum for comparison. CFs were labeled by GFP expression (green); Purkinje cells were labeled through immunofluorescent staining for Calbindin (in blue); CF varicosities in the molecular layer (together with some mossy fiber terminals in the granular layer) were labeled through immunofluorescent staining for VGlut2 (in red). C, caudal; D, dorsal; R, rostral; V, ventral. (B) Time-lapse images (TPF transversal view: maximum intensity z-projections) over a 12-d monitoring period showing the stability of CFs ascending branches. (Scale bar, 10 μm.) 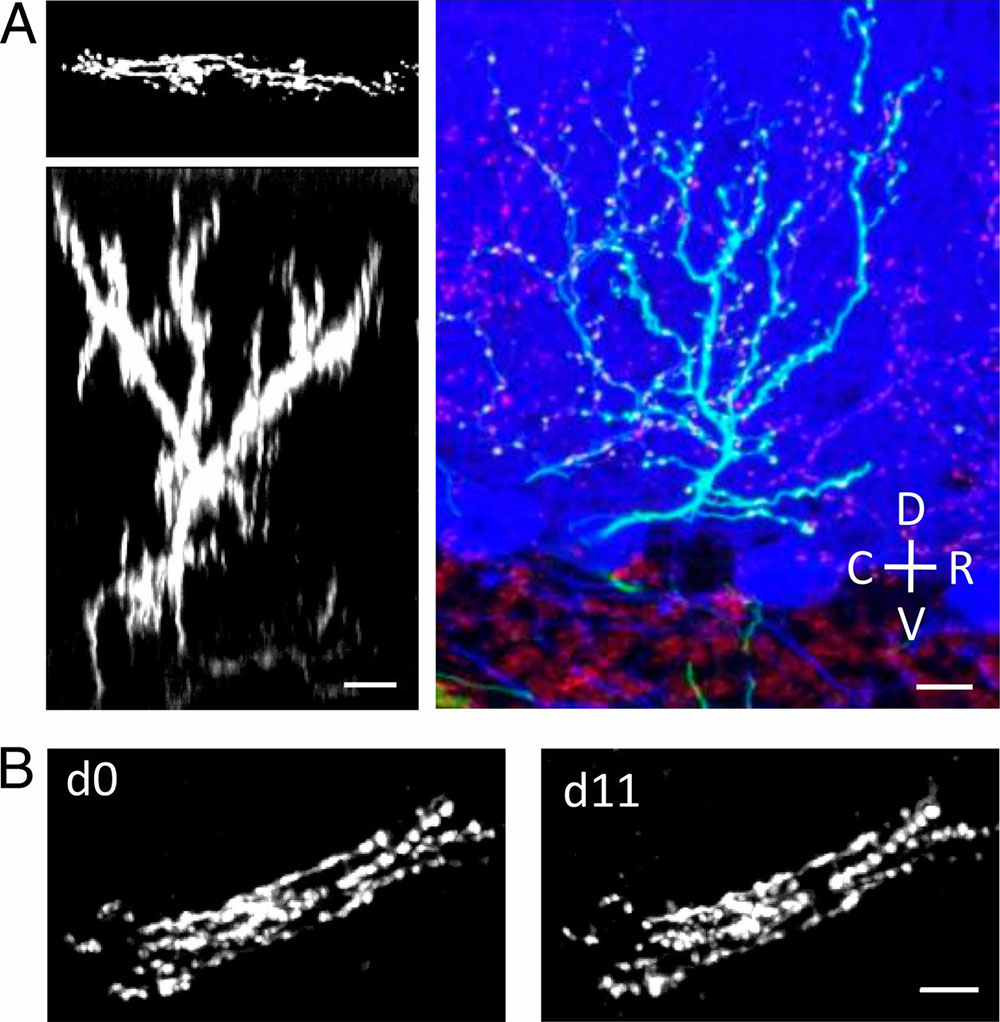 Vincenzo is from Naples, Italy. He received his PhD in Molecular and Cellular Neurobiology in 2003 from the University of Basel, Switzerland for his examination of pre-synaptic terminal dynamics in the hippocampus, done under the supervision of Pico Caroni at the Friedrich Miescher Institute for Biomedical Research, part of the Novartis Foundation. He was awarded an EMBO postdoctoral fellowship in 2004 to train with Dr Karel Svoboda at Cold Spring Harbor Laboratory, New York, USA, to work on the plasticity of cortical connections using in vivo multiphoton microscopy. In 2008, Vincenzo was appointed Honourary Group Head of the Neuroplasticity and Disease Group (renamed the Synaptic Plasticity and Repair Group in 2016) at the MRC Clinical Sciences Centre and Lecturer (Assistant Professor) in the Faculty of Medicine, Imperial College London.  In 2014, he was promoted to Senior Lecturer (Associate Professor) and in 2019 to Reader.  His team studies the mechanisms of synaptic and axonal reorganization in the brain relevant to ageing and neuropsychiatric diseases by using a combination of in vivo optical imaging and molecular genetic, behavioural and computational analyses, the results of which have been published in high-impact peer review journals.  Vincenzo is on the editorial boards of Sciencematters, Frontiers in Cellular Biochemistry, Frontiers in Molecular Neuroscience and Neural Plasticity, and in 2018 was nominated to the F1000Prime Faculty of Neuroscience, Section of Neurobiology Disease & Regeneration. Outside the laboratory, Vincenzo enjoys his family, sports (especially swimming, rowing, tennis, skiing, and, of course, football), messing around in the kitchen, visual arts (such as cinema and photography), travelling and listening to all kinds of music.

Osh is from Lagos, Nigeria. He received his MSc in Physics from Umea University, Sweden, for his work in the lab of Professor Henry Baltes at the ETH in Zürich, Switzerland on the post processing of CMOS multi-electrode arrays (MEAs) for biological compatibility with shifted electrode design, making it possible to realise different geometries for defined neural networks in vitro. He tested the liquid state machine hypothesis on cultured MEAs to verify the separation and approximation properties, and later extended MEAs to support multiculture systems and surface functionalisations for contractile cells. Osh is currently a PhD student at Imperial College London in the Neural Coding Laboratory of  Simon Schultz, and in 2013 he joined the Neuroplasticity and Disease Group (renamed the Synaptic Plasticity and Repair Group in 2016) as a visiting PhD student to work on in vivo imaging of experience-dependent synaptic plasticity. His research focus is on neural microcircuits, specifically, how concepts such as memories, information content, processing and coding strategies can be unambiguously tied to micro/macro structural charges.  Osh is founder and CEO of Koniku®, an award-winning biotechnology company, established in 2013, specialising in neuron electronic interfacing.  Outside the lab, Osh is an avid footballer and snowboarder, and is probably too passionate about jazz.

Cher received her BSc in Neuroscience from the University of Bristol in 2013 and then worked with Dr Roman Shusterman at the University of Haifa on the electrophysiological properties of neurons in the olfactory bulb. Cher has a keen interest in using interdisciplinary approaches to applying computational methods to the study of synaptic connectivity in the brain. In October 2014, Cher joined the Neuroplasticity and Disease Group (renamed the Synaptic Plasticity and Repair Group in 2016) on a 4-year EPSRC-funded Neurotechnology Centre for Doctoral Training (CDT) PhD studentship to study high-throughput visualization and computational consequences of increased synaptic plasticity and axon regeneration in the living aged brain.  This studentship is in collaboration with Claudia Clopath and Anil Anthony Bharath in the Department of Bioengineering at Imperial College London. In her spare time, Cher enjoys martial arts, dancing, computer games, strategy board games, computer animations and travelling.

Elizabeth was born and raised in Saskatoon, Canada. She received her BSc (Hons) in Biology, with a minor in Psychology, in 2018 from the University of Victoria, Canada. Her honours project, supervised by Brian Christie, was on hippocampal long-term potentiation in FMR1 KO mice. Elizabeth did her MSc on LGI1 release in epilepsy in Gabriele Lignani’s lab (University College London Queen Square Institute of Neurology, UK), graduating with Distinction in September 2019, and in October 2019, she joined the Synaptic Plasticity and Repair Group as a PhD student and Early Stage Researcher in the Syn2Psy Innovative Training Network, funded by the EU Horizon 2020 Program under the Marie Sklodowska-Curie Actions Initiative. She is investigating synaptic and neural network dysfunction in a new in vivo model of Down syndrome using 2-photon imaging.

Maria was born in Badajoz, Spain.  She received her BSc in Cancer Biology and Immunology from the University of Bristol, exploring neurite dynamics in in vitro models of Parkinson’s disease, and an MRes with Distinction in Health Sciences Research from the University of Bristol for her work on using induced pluripotent stem cell-derived midbrain-like organoids and animal models to investigate if influenza infection is a predisposition to Parkinson’s disease.  Maria joined the Synaptic Plasticity and Repair  Group in March 2021 as a MRC Doctoral Training Partnership (MRC DTP) PhD Student to investigate the different seeding and morphological properties of α-synuclein in different synucleinopathies.  She is co-supervised by JavierAlegre Abarrategui, Department of Brain Sciences, Imperial College London.

Michael grew up near Ulm, Germany. He received his BSc (2006) and MSc (2008) in Biochemistry and his PhD (2012), under the supervision of Thomas Wirth and Bernd Baumann, from the Institute of Physiological Chemistry, Ulm University.  Michael studied NF-kB signalling, a key transcriptional regulator of inflammatory responses, in astrocytes and neurons in mouse models, showing astrocytic NF-kB activation can drive neuroinflammatory processes and disrupt normal brain development and homeostasis. After a break to travel around the world for nine months, and a postdoctoral stint in Ulm in 2013,  Michael joined Francois Guillemot’s lab at the Francis Crick Institute, London in mid-2015 to use genomics approaches, including single cell RNA-sequencing and ATAC-sequencing, to study the transcriptional and epigenetic mechanisms underlying the maturation of astrocytes.  In November 2021, he joined the Synaptic Plasticity and Repair Group as a research associate to use single cell transcriptomics to study the impact of Down syndrome on human cortical development.  Outside the lab, Michael enjoys travelling and outdoor activities.

Shabana received her BSc (Hons) in Biomedical Sciences from University College London (UCL) in 2010, specialising in the Neurosciences and Developmental Biology. Her undergraduate research project, with Professor John Parnavelas, focussed on the cellular mechanisms of interneuron migration in the developing cortex. She completed her MSc in Clinical Neurosciences in 2011 at the UCL Institute of Neurology (ION), graduating with Distinction. During this time, she worked in Professor Dame Linda Partridge’s group at the UCL Institute of Healthy Ageing, in collaboration with Professor John Hardy’s group at the ION, on modelling mutations in parkinsonian disorders using the Drosphila melanogaster fly model. Shabana completed her PhD in Developmental Neurobiology in 2016 at the Francis Crick Institute in London in Dr Siew-Lan Ang’s group, where she studied the molecular heterogeneity of midbrain dopamine neurons. Shabana’s work uncovered the role of the NeuroD family of bHLH transcription factors in the survival of a novel subset of midbrain dopaminergic neurons projecting to the lateral septum. She joined the Synaptic Plasticity and Repair Group in June 2017 on a 3 year MRC postdoctoral fellowship to study the cellular and molecular mechanisms regulating cortical synaptic circuit regeneration in response to injury and neurodegenerative disease. Outside of the lab, Shabana enjoys travelling, swimming, photography, reading fiction and creating SciArt.

Raquel is from Porto, Portugal. She received her MD in 2005 from the University of Porto and then continued her medical education in the Neurology Residency Programme at Centro Hospitalar de São João (Porto), which she completed in 2012. In 2013, Raquel was admitted to the Graduate Programme in Areas of Basic and Applied Biology (GABBA) at the University of Porto, and in December 2014 she joined the Neuroplasticity and Disease Group (renamed the Synaptic Plasticity and Repair Group in 2016) as a PhD student, supported by the Portuguese Foundation for Science and Technology (FCT) to investigate the molecular mechanisms of axon and synaptic remodelling in the context of brain injury. Outside the lab, Raquel enjoys photography, cinema, music and discovering London.

Maria is from Milan, Italy. She received her BSc in Biological Science from the University of Milan, whereafter she held an internship in neurobiology in the lab of Professor Andrea Nistri, at the International School for Advanced Studies (SISSA) in Trieste, Italy, investigating and then publishing work on how nicotinic acetylcholine receptor activation can support cell survival by contrasting glutamate mediated excitotoxicity in hypoglossal motoneurons. Maria returned to the University of Milan to do her MSc in Neuroscience, which she completed in 2016, and then worked at San Raffaele Hospital in Milan to study astroglial impairment in Rett syndrome, before joining the Synaptic Plasticity and Repair Group in July 2017 on a 3 year Alzheimer’s Research UK (ARUK) PhD Scholarship to work on a new in vivo model of axon pathology in human tau mutants. In her spare time, Maria enjoys cooking for friends, reading and travelling.